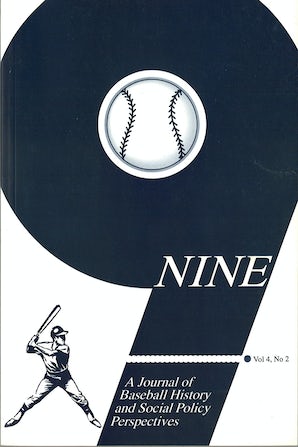 Henry Chadwick and the Invention of Baseball Statistics
Jules Tygiel

Baseball and America in 1969: A Traditional Instituition Responds to Changing Times
Ron Briley

A Colony Within a Colony: The Western Canada Baseball League of 1912
Bill Kirwin

Great Time Coming: The Life of Jackie Robinson from Baseball to Birmingham
reviewed by Terence Malley

Cobb: I Saw the Film; I Read the Book; Then I Wrote the Review
reviewed by David Pietrusza

Inside the Strike Zone
reviewed by James B. Dworkin

One Pitch Away: The Players' Stories of teh 1986 League Championships and World Series
reviewed by Terence Malley

Bums No More! The Championship Season of the 1955 Brooklyn Dodgers
reviewed by Ron Kaplan

The Fan
reviewed by Peter Carino

Hawk: An Inspiring Story of Success at the Game of Life and Baseball
reviewed by Jim Warnock

The Kid on the Sandlot: Congress and Professional Sports 1910 - 1992
reviewed by Michael J. Haupert

A Hard Road to Glory —Baseball: The African-American Athlete in Baseball
reviewed by Dick Clark