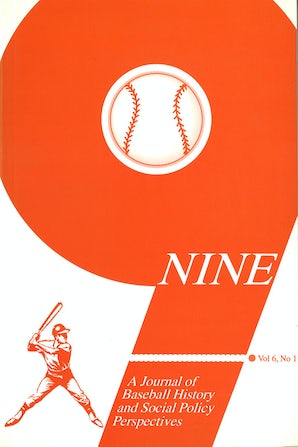 The Mormon Game: The Religious Uses of Baseball in Early Utah
Jim Warnock

The Road to October 23, 1945: the Press and the Integration of Baseball
Chris Lamb & Glen L. Bleske

The Yankee Encyclopedia
DiMaggio: An Illustrated Life
The Wonder Team: The True Story of the Incomparable 1927 New York Yankees
reviewed by Larry Gerlach

The Man in the Dugout
reviewed by Guy Waterman

Innocence and Wonder: Baseball through the Eyes of Batboys
Batboys and the World of Baseball
reviewed by Guy Waterman

The Jackie Robinson Reader: Perspectives on an American Hero
reviewed by Terence Malley

The Whiz Kids and the 1950 Pennant
reviewed by Jay C. Ziemann

Wrigleyville: A Magical History Tour of the Chicago Cubs
reviewed by James B. Dworkin

Up and Ready: The Oral History of a Florida Reliever
Wes Singletary

IF I WERE COMMISSIONER
Dick Crepeau