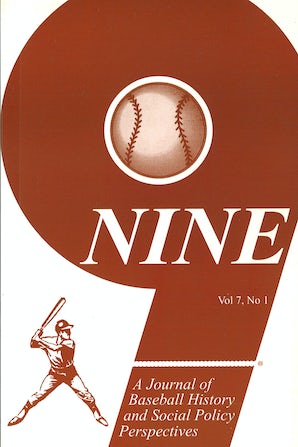 Three Stikes, You're Out—The Baseball Bat and Violence, or What Have They Done to My Louisville Slugger?
Bob Klein

Cal Ripken and the Condition of Freedom: Theme and Variation on the American Work Ethic
Carol J. Pierman

Fair or Foul: The Claims of Oral History on the 1925 World Series
Richard F. Peterson

The Cultural Encyclopedia of Baseball
reviewed by Bob Boynton

A Brave New World: The Summer of 1943
Guy Waterman

Once Around the Bases: Bittersweet Memories of Only One Game in the Majors
reviewed by Jean Hastings Ardell

The Ripening of Pinstripes: Called Shots on the New York Yankees
reveiwed by Matthew Brennan

The Dutiful Dozen
reveiwed by Mary A. Hums

Umpires: Classic Baseball Stories from the Men Who Make the Calls
reviewed by Chris Lamb

Lefty O'Doul, The Legend that Baseball Nearly Forgot (The Story of the Hall of Fame's Missing Star)
reviewed by John Pastier

You're Out and You're Ugly Too! Confessions of an Umpire with Attitude
reviewed by Brant E. Ducey

Voices from the Negro Leagues
reviewed by Jerry Malloy