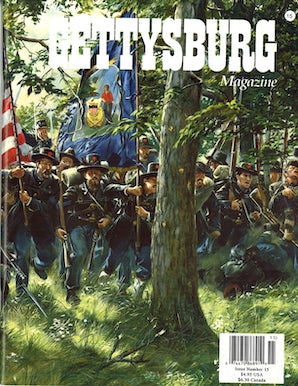 An Analysis of Buford Manuscripts
by Eric J. Wittenberg

The Spencer Repeating Rifle at Gettysburg
by D. Alexander Watson

The Florida Brigade at Gettysburg
by Thomas L. Elmore

Holding the Right: The 137th New York Regiment at Gettysburg
by Jay Jorgensen

A Few Moments of Peace: The Legend of Spangler's Spring
by George C. Bradley

Col. James Keith Marshall: One of the Three Brigade Commanders Killed in the Pickett-Pettigrew-Trimble Charge
by Michael W. Taylor

Personal Battle Weapons of the Civil War: Alexander Webb and His Colt Navy Revolver: In the "Pinch of the Fight" During "Pickett's Charge" at Gettysburg
by Wiley Sword

A Young Girl at Gettysburg: Tillie Pierce: A Firsthand Look at the Battle
by Michael L. Thompson

"A Field Made Glorious": Cemetery Hill: From Battlefield to Sacred Ground
by Eric A. Campbell