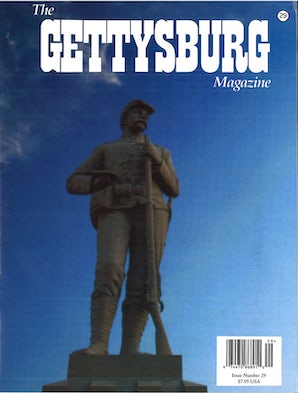 A Battle of Wits: Intelligence Operations During the Gettysburg Campaign. Part 1: Clandestine Preparation for Invasion vs. Quest for Information
by Thomas J. Ryan

Putting Gettysburg on the Map: How Four Generals Precipitated a Battle
by David L. Callihan

Additional Notes on the 154th New York at Gettysburg
by Mark H. Dunkelman

Did You Get There? Capt. Samuel Johnston's Reconnaissance at Gettysburg
by Bill Hyde

Around the Flank: Longstreet's July 2 Attack at Gettysburg
by Paul Clark Cooksey

Orphans in the Storm: The 115th Pennsylvania and 8th New Jersey in the Fight for the Wheatfield and Stony Hill
by James A. Woods