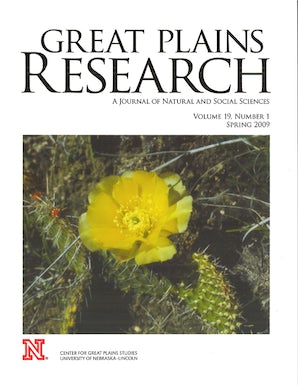 Causes and Impacts of Salinization in the Lower Pecos River
Christopher W. Hoagstrom

Midkiff, Ken; Foreword by Robert F. Kennedy, Jr.
Not a Drop to Drink: America's Water Crisis (and What You can Do).
Reviewed by Ann Bleed

Rosenberg, Norman J.
A Biomass Future for the North American Great Plains: Toward Sustainable Land Use and Mitigation of Greenhouse Warming
Reviewed by Steven L. Fales

Lynch, Wayne
Owls of the United States and Canada: A Complete Guide to Their Biology and Behavior
Reviewed by Paul A. Johnsgard

Otter, Ken A., ed.
Ecology and Behavior of Chickadees and Titmice: An Integrated Approach
Reviewed by Charles R. Brown

Teer, James G.
It's a Long Way from Llano: The Journey of a Wildlilfe Biologist
Reviewed by Fred S. Guthery

The Harvard Project on American Indian Economic Development
The State of the Native Nations: Conditions under U.S. Policies of Self-Determination
Reviewed by Gavin Clarkson

Wiegand, Shirley A., and Wayne A. Wiegand
Books on Trial: Red Scare in the Heartland
Reviewed by Ahmed A. White