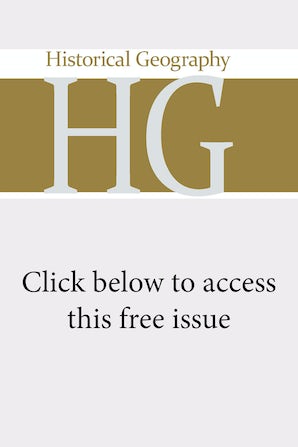 Conference Report
What futures for the pillar of geography? A report on the 16th International Conference of Historical Geographers, London
Richard Powell, Robert M Wilson

When Silence Reigns: Sexuality, Affect and Space in Soldiers’ Memoirs of the Napoleonic Wars
Marianne Blidon

Afterword: When Has Sexuality Ever Been About Sex? A Review of Historical Geographies of Sexualities
Eric Olund

“Fighting for the Rock at Home and Abroad”: Barbuda Voice Newspaper as a Transnational Space
Amy E. Potter

Broadening horizons: Wynn in and about the antipodes
Andrea Gaynor

Graeme Wynn: The Historical Geography of Environment and Empire from the Edges
Jane Carruthers