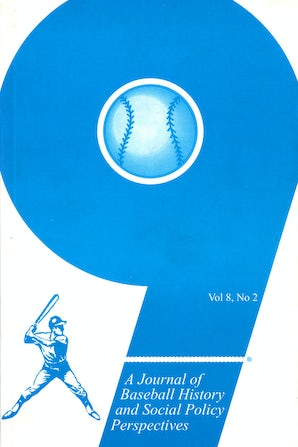 America, Baseball, and Historical Memory in 1956: The Way We Never Were
Ron Briley

A Veritable Who's Who of Managing
Bill Werber and C. Paul Rogers III

Tony C: The Triumph and the Tragedy of Tony Conigliaro
reviewed by Karl Lindholm

Judge and Jury: The Life and Times of Judge Kenesaw Mountain Landis
reviewed by Lee Lowenfish

Take Two and Hit to Right: Golden Days on the Semi-Pro Diamond
reviewed by Peter Carino

In the Ballpark: the Working Lives of Baseball People
reviewed by Rob Bellamy

More Than a Pastime: An Oral History of Baseball Fans
reviewed by G.S. Rowe

Fisk's Homer, Willie's Catch and the Shot Heard 'Round the World: Classic Moments from Postseason Bseball, 1940-1996
reviewed by Robb Bellamy

Baseball's Radical For All Seasons" A Biography of John Montgomery Ward
reviewed by James B. Dworkin

The Rajah of Renfrew
reviewed by George Goodman

Tales from the Dugout: the Greates True Baseball Stories Ever Told
reviewed by Anna R. Newton

The Whiz Kids and the 1950 Pennant
reviewed by David A. Goss

Rube Marquand: The Life and Times of a Baseball Hall of Famer
reviewed by Jay Ziemann

Babe Ruth and Where Have You Gone, Joe DiMaggio?
reviewed by Frank Ardolino

For the Record: The Pitcher who had the Courage to Pitch to Maris
John B. Holway

THE STATE OF BASEBALL